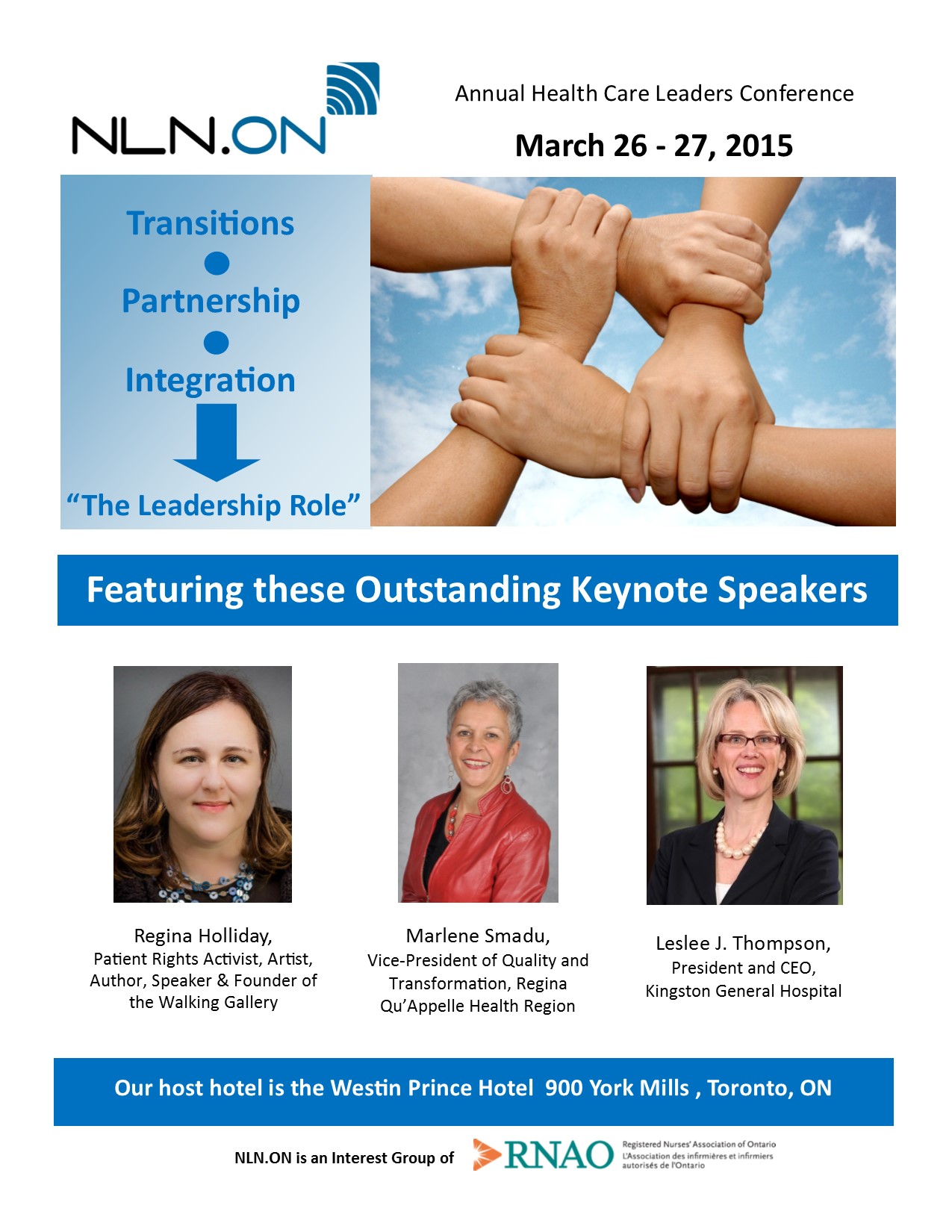 Welcome to the 2015 NLN.ON Conference,

at the Westin Prince Hotel

Regina Holliday is a Washington, DC-based patient advocate and artist known for painting a series of murals depicting the need for clarity and transparency in medical records. This advocacy mission was inspired by her husband Frederick Allen Holliday II and his struggle to get appropriate care during 11 weeks of continuous hospitalization in five facilities. After his death from kidney cancer on June 17, 2009, she began “73 Cents,” a mural depicting her husband dying in darkness surrounded by inaccessible technological tools in a closed data loop. The title refers to the cost per page for medical records in the state of Maryland.

Holliday’s artwork became part of the national healthcare debate and was reported on in the mainstream press, as well as reviewed by such journals as BMJ and APA. She began an advocacy movement called “The Walking Gallery,” for which medical providers and advocates wear “patient story” paintings on the backs of business suits. She authored The Walking Wall: 73 Cents to the Walking Gallery.

Backed by her own patient and caregiving experiences, Regina Holliday travels the globe heralding her message of patient empowerment and inclusion in healthcare decision making, and offering guidance on crowd funding in healthcare. She fearlessly stands before officials and practitioners demanding a thoughtful dialog on the role patients play in their own healthcare.

Marlene Smadu, RN, EdD, LLD (h.c.) is Vice-President of Quality and Transformation, Regina Qu’Appelle Health Region, Regina, Saskatchewan, Canada. She has practiced nursing in all domains (clinical, education, administration, research and policy) and in a variety of settings in Canada, Papua New Guinea, and Qatar.

Dr. Smadu is a board member for the International Council of Nurses and the Canadian Institute for Health Information (CIHI) and is member of the University of Regina senate.

Starting out as a critical care nurse, Leslee has three decades of health care experience that span both public and private sectors. She was appointed to her current position as President & CEO Kingston General Hospital in February 2009. Over the past six years, Leslee has led a major transformation at KGH moving it from a hospital under government supervision, to a high performing academic centre that has received multiple awards and international recognition for its patient-centred achievements.

Leslee currently serves as Chair of the Council of Academic Hospitals of Ontario, Chair of the Canadian Foundation for Health Care Improvement and Board member of the Ontario Institute for Cancer Research. Over the past year she also served as a member of the Ontario Health Innovation Council. Recent awards received include: Top 100 Most Powerful Women in Canada (2013), Diversity 50 Canada (2012), Women in Business Award (2012) and the Facing Cancer Together Award of Honour (2012) for helping to pioneer the Look Good Feel Better program in Canada.

Leslee earned Masters of Business Administration from Richard Ivey School of Business (1998), a Masters of Science in Nursing from the University of Toronto (1987), and a Bachelor of Nursing Science from Queen’s University (1984). She is also a Certified Health Care Executive (CHE), Certified Corporate Director (ICD.D) and Assistant Professor at Queen’s University. Leslee is frequently asked to teach and speak at conferences on topics of innovation, leadership and patient engagement.

The Nursing Leadership Network of Ontario (NLN.ON) is your voice for nursing leadership in Ontario. NLN.ON works collaboratively with RNAO in providing and shaping the support needed by nurse leaders and administrators in the province. NLN.ON is committed to linking strategically with nurse leaders across the province in order to influence the future direction of health care.

An interest group of